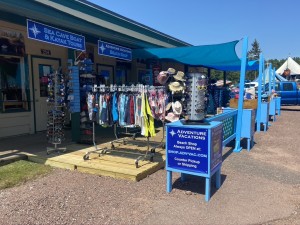 Adventure Vacations Beach Shop and Boat/Kayak Tours is a family-owned and friend operated business which provides high quality Apostle Island sea cave boat and kayak tours.  Our Beach Shop is found on Madeline Island in Lake Superior, located adjacent to the Apostle Islands National Lakeshore. We offer a wide variety of clothing, souvenirs, water toys and much more for sale in our shop! Whether you’re new to outdoor adventure or a seasoned pro, we love to share our enthusiasm, knowledge and experience of these islands. Our goal is to expand your horizon of what ‘mother nature’ has to offer!

Meet Atlas, also known as Adventure Vacations’ mascot! You can usually find Atlas hanging around the beach shop! He is always up for an adventure whether it be a boat ride, paddle boarding, walking through the woods, or playing fetch; he loves everything! If you see Atlas around, don’t be shy; he is super friendly!

Lauren started working with Adventure Vacations in 2016. You may also see
her bartending at Tommy’s! She met her husband on Madeline Island in 2014 when she spent her first summer living here. She is learning French and has a bachelor’s degree in communications. During the winter, Lauren and her husband live in Lyon, France. Lauren loves working for Adventure Vacations because she enjoys sharing the magic of the Apostle Islands with others and it’s a really fun place to work!

Natalie has worked on and off at Adventure Vacations for six years. She grew up in this beautiful Chequamegon Bay area and considers it home. When Natalie isn’t working, you will find her enjoying time with her two pet lizards who love the camper life! Natalie grew up on Lake Superior and loves getting out on the water whether by boat, kayak, or paddle board. She lives in St. Paul, MN during the off season but you can often find her traveling the globe.

Captain Chas is an ASA Sailing Instructor who’s coming back for his second season with Adventure Vacations. He loves spending time on the water and with his good friends, owner’s Brad and Karen. Chas is a sailing instructor during the off season in sunny Melbourne, Florida. He’s quite the traveler, too! He once sailed to Cuba with Captain Nick and was an EMT with Search and Rescue in Colorado. He’s an adrenaline junkie and the extreme weather of Lake Superior is always exciting!

Meet Kayak Guide, Danielle! 2021 will be her second season with Adventure Vacations and her fifth season kayak guiding on Lake Superior. Danielle loves the outdoors and she’s in her element amongst nature’s elements. She’s been paddling on the water since before she could ride a bike and even worked with the forest service camping for four years. She spends the winter season on this Chequamegon Bay peninsula and enjoys cross country skiing amongst the hemlocks and watching the twinkling stars.

Captain Scott is our longest standing boat captain at Adventure Vacations at seven seasons! He’s had his captain’s license since 2003 and loves the easy going Island life. During the off season he enjoys chasing the sunshine in the south and soaking in the heat as well as welding, logging and carpentry. His favorite part of working for Adventure Vacations is his cool co-workers.

Jessica has been with Adventure Vacations for 11 years and is our longest standing employee!! During the winter months she lives in Jackson, Ohio where she is a high school science teacher. She has two daughters, Fern and Phoebe, and her husband, Justin, also works at Adventure Vacations! Jessica enjoys talking to visitors about the best spots on Madeline Island and helping them plan their trips throughout the Apostles. The beautiful sunsets are one reason Jessica loves Madeline Island.

This is Frances’ third summer working for Adventure Vacations and her 15th full summer on Madeline Island! Frances just finished her first year at Grinnell College in Iowa where she’s majoring in biological chemistry. She loves the outdoors regardless of the season and enjoys kayaking, hiking, cross -country skiing, and making snow people. Her favorite part of working for Adventure Vacations is getting to know clients and being around an awesome and supportive crew!

Neal is one of our beloved Boat Captains. 2021 will be his second season with Adventure Vacations. He loves boats so much that he lives in a boathouse on Madeline Island during the summer. Event Pro is Neal’s sound production company that does sound for a bunch of really exciting events, including the 4th of July fireworks on Madeline Island! During the winter months Neal lives in Hastings, MN where he runs a farm and green house and enjoys skiing. If you see Neal around this summer wave at him and his golden retriever, Ivy! 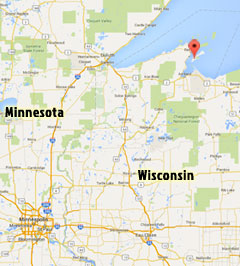